Gary Fisher was one of the pioneering fathers of mountain biking and his innovative spirit is the driving force behind the bike collection from Trek bearing his name. We're proud to carry the bicycles that Gary has designed for Trek. Here's a little more about the man and his machines. 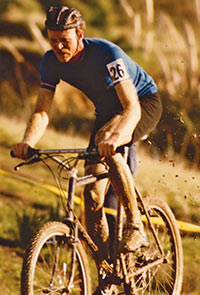 Mountain Bike Hall of Fame inductee Gary Fisher has been at the forefront of bicycling since the 60s. His legendary status in mountain biking began when an ambitious group of friends and riders from Marin, California started designing and building off-road bicycles they called "klunkers," and racing them down the steep dirt roads of Mt. Tamalpais. A new type of bicycle and a new sport was launched, and Gary was in the thick of it.

Yet before all that, Gary had to start somewhere. Like most bike riders in the early 60s, Fisher's bike obsession began on the road. He started competing at age 12 in both road and track. From there, Gary's road career peaked in the mid 70s with a Category 1 USCF license after a brief hiatus due to conflict with the "long hair" rule. Fisher also competed in cyclocross during this time, which may have been an early spark to fuel his off-road fire.

Gary was a champ then and he still is, too, having won the Masters' XC National title and the brutal European TransAlp race. Which means that he's out testing his bikes day in and day out to design better and faster bicycles for you.

Gary Fisher and his collection of bicycles have always led the way on the technological front. From Gary's partnership with Charlie Kelly, which created the first mountain bike, to his promotion of the 29er (the off-road bikes with bigger wheels that roll so well), to the creation of Fisher's Genesis and Genesis2 Geometry (which gives you perfect handling on both the ups and downs), Gary continues to be one step ahead. His genius covers more than just fat-tired mountain bikes, too, Gary leverages his vast bicycle knowledge into road, cyclocross and commuter designs as well.

To further spread Gary's bike-riding message to an even wider audience as well as to utilize one of the world's top bicycle manufacturing companies, Fisher teamed up with Trek Bicycles to offer the Gary Fisher Collection. Together, Gary's imagination to build the ultimate bike is given even more free reign. Simply put, Fisher dreams, Trek unleashes!

As Fisher moves forward, the company remains faithful to their commitment of improving your ride. From superior full-suspension race machines to carbon wonder-bikes and branching out into the road world, Gary Fisher continues to innovate and push the boundaries, letting the masters at Trek create some of the best-riding bicycles you'll ever swing a leg over.

Swing by soon! Stop on by and we'll happily show you some of the Fisher Collection, and even let you take a test ride to experience the magic that makes his bikes so special!